The Prime Law of Networks:

Network value and capacity increases exponentially based on the number of interconnected nodes divided by packet size.

In transportation networks, the optimum packet size moves between one person and one family, 1-6 people. We travel as individuals and families. Designing human transportation networks to support human nature has 10X paybacks. The current government planned transportation network that mandate burning coal/oil to move two tons to move a person accounts for debt, oil-wars, and Climate Change.Government mass transportation has the same core failure as mass production, the larger the batch the poorer the quality.Small packets support small nodes. Minimizing node size and vastly more noded to be interconnected.Value is illustrated by the number of connected lines. Ants and bees create vastly complex and efficient networks. Despite all the defects, cars dominate urban transportation because their small packet size tailors each trip to each traveler. Each person has about 20 trillion red blood cells in our circulatory system that stream resource to need on demand. Like the telephone, the car is the right device. After nearly a century of rotary telephones under government monopolies, liberty to innovate communications was restored in 1982. Communications networks digitized based on packet-switching technologies. Transportation networks will digitize as soon as free markets are restored. The Solar Mobility Actallows cities to do for transportation what the courts did for communications in 1982. 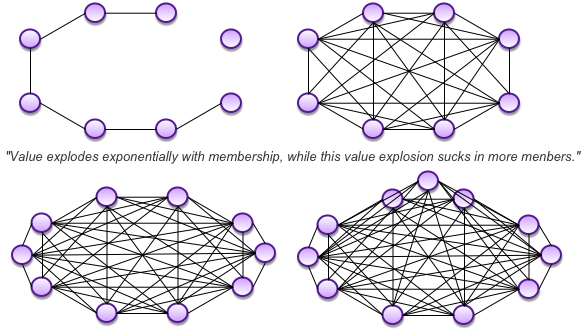 History of the Internet

The Internet existing decades before it commercialized. The Mother of All Demos was in 1968. Despite the fact that the technology existed, it could not commercialize until liberty was restored in 1982. Liberty is important. There is no minority as tiny and disruptive as commercial innovators. Start at 29 minutes and watch for 4 minutes to see graphical navigation and the mouse.

This 1994 newscast illustrates how expectations at one point are entirely backward sounding today. All applications of technology to networks must keep ahead of expectation to remain relevant. Networks are dynamic processes, not static technology.

Interaction between innovators and customers in niche markets is essential to sort brilliant ideas from commercially viable ones. The fact that transportation still has the gas mileage of the Model T underscores that the Prime Law of Network needs to be applied to transportation networks as it was to communications after the Federal communications monopoly was recognized as unconstitutional in 1982.We see this Prime Law of Networks is every aspect of human behavior from children playing games to the way commercial giants create economic clusters such as Silicon Valley. More work needs to be done to polish the parameters of this Prime Law of Network. As a starting point, it seems to be driven by:

The chart of Microsoft's cornucopia of profits is a revealing graph because it mirrors several other plots of rising stars in the Network Economy. During its first 10 years, Microsoft's profits were negligible. Its profits rose above the background noise only around 1985. But once they began to rise, they exploded.Federal Express experienced a similar trajectory: years of minuscule profit increases, slowly ramping up to an invisible threshold, and then surging skyward in a blast sometime during the early 1980s.The penetration of fax machines likewise follows a tale of a 20-year overnight success. Two decades of marginal success, then, during the mid-1980s, the number of fax machines quietly crosses the point of no return - and the next thing you know, they are irreversibly everywhere.

Network Resiliency is the reverse of adding network connections:

Liberty creates the "general welfare" through tolerance of disruptive minorities creating choices and the Wisdom of the Many sorting those choices in a Darwinian Crucible of free markets and free speech: